What drives a great story?  Characters that are motivated, that truly WANT or NEED something.  So apply this theory to you in your day-to-day life.  How do you pursue your largest goals, or tackle your most difficult challenges?  Are you always able to articulate exactly what you want in the moment, or perfectly convey what you feel in the moment you’re experiencing it?  Ever felt extremely afraid, but been in an environment where you have to pretend the opposite?  Ever had to withhold absolute joy or deep sadness for risk of upsetting others around you?  What about keeping a secret that’s just gnawing away at you?  Ever had to try and get information without directly asking for it?  We all have.

Despite your best efforts, in these dramatic moments in your own life, your behavior is giving off subtle clues as to what you’re really thinking or feeling.  Most of the time, you can get away with it – because people just aren’t paying attention that closely.  But in a film, all eyes are on the character, their plight is magnified.  And these are the moments that provide us with some of our juiciest, most heart-poundingly suspenseful, emotionally gripping, or most acutely emotional moments.  These scenes are usually comprised more of what is NOT said, than what is.  Dialogue is often minimal or in some cases is only peripherally tied to what the characters are actually feeling or experiencing.  What makes these moments even more powerful, is that WE know everything about the characters and the situation they’re in.

This is subtext — the true meaning beneath the dialogue.  Subtext is a tool first introduced to a story by the writer, intended to reveal a deeper truth. Much like irony, foreshadowing, or other storytelling devices it can be extremely powerful (especially when it integrates these other elements) as a tool for laying the complex emotions and motivations of your characters in a given moment.  I love subtext because you find the best versions of it in strong, smart, character-first films.  It’s my absolute favorite aspect to create in a film because it rewards the viewer who’s really “all-in” on the storytelling experience.  You start by establishing it in the screenplay, and then work carefully and openly to bring nuance and dimension to it during the rehearsals with your actors.  This way, it feels as real to them as it did you – if not moreso.  If you’ve done your job right during these first two levels, then you focus on executing it on-set – making sure that the camera, lighting, and set design are all there to support, not overpower or detract from your actors’ performances.  Finally, during editing, subtext-heavy scenes are aided by patience, letting shots breathe, paying more attention to actors’ expressions and movements then their words, even.  If you’re doing it right, this extra “air” you create will only underscore what you want the audience to feel. 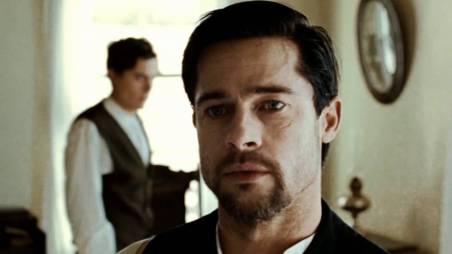 Deeper and deeper into a new screenplay, I’ve been thinking about subtext a lot lately.  And then this weekend, I re-watched Andrew Dominik’s The Assassination of Jesse James by the Coward Robert Ford (2007).  This film is meticulous, exacting and hauntingly beautiful.  Focused dually on the last years of famed American outlaw Jesse James’ (Brad Pitt) life and the rise of the young, socially awkward outlaw that would ultimately gain his trust and murder him in cold blood, Robert Ford (Academy-Award nominee Casey Affleck).  This film is filled with great subtext – with scenes becoming more and more tense as the relationship between these two men unravels.

One scene is particularly noteworthy.  At a dinner with a family that provides the James’ gang with secret shelter, Ford sits at one end, James opposite.  Between them is Ford’s older brother Charlie (Sam Rockwell), who knows the truth about what Bob is planning, while Jesse, can only suspect at this point, going off of his own raw instinct.  Jesse uses an anecdote of another former gang member to 1. see how Bob reacts 2. to frighten Bob.  Then watch how Bob cuts right through his message bullishly, but James remains glaringly cool under immense tension.

So much subtlety and built up tension.  So much being said about these characters and their dynamic.  This scene’s just a perfect example of well-crafted subtext.

Schindler’s List (1993):  Spielberg and screenwriter Steven Zaillian layered their Academy-Award winning film with many powerful moments of subtext at its finest.  Pretty much every scene where Liam Neeson’s Oskar Schindler tries to urge, suggest, and carefully influence Ralph Fiennes’ Amon Goeth away from committing murder is a prime example.  But the scene that I’ll always think of when I think of subtext in general is the scene where Schindler and his business manager Itzhak Stern discuss an “evacuation order” for the concentration camp that has come through.  Both of them know this means certain death for all of the Jews in the camp, including Stern.

Stern:  “I know the destination. These are the evacuation orders, I’m to help arrange the shipments, put myself on the last train.”

Schindler:  “That’s not what I was going to say. I made Goeth promise to put in a good word for you. Nothing bad is going to happen to you there, you’ll receive special treatment.”

Stern:  “The directives coming in from Berlin talk about “special treatment” more and more often. I’d like to think that’s not what you mean.”

Schindler:  “Preferential treatment. All right? Do we have to create a new language?”

Challenging  as any of their conversations up until this point in the film have been.  After this exchange, Spielberg fills the scene with some silence, then Schindler adds, “Some day all of this will be over.  I’d like to say we’ll have a drink.”

Stern tearfully replies.  “Maybe I should have that drink now.”

Instead of cutting away, or tightening time, Spielberg stays on Ben Kingsley as he watches Schindler pour them both a drink.  The moment says so much about these two men, who began as business partners who only joined forces because they had to.  Even though one is a Nazi and one is a Jew, they’ve become friends – and Stern is finally asking to have that drink with his friend.  It’s one that Schindler has been trying to make him have since they first started their business partnership.

The Godfather (1972):  Francis Ford Coppola’s epic is essentially the greatest film of all-time; pretty much filmmaking perfection.  One scene that I’ve only grown to appreciate more and more happens in the middle of the film, when Michael (Al Pacino) sits with his father’s almost assassin in an empty restaurant.  This man thinks he’s here to negotiate with Michael about business.  What he doesn’t know is that Michael is only moments away from going into the bathroom, extracting a revolver, and shooting him dead.  Revolutionary sound design by Walter Murch underscores the tension, with clinking silverware, light conversation, and then later the violent rumbling of the subway train just before Michael withdraws his gun and avenges his father. 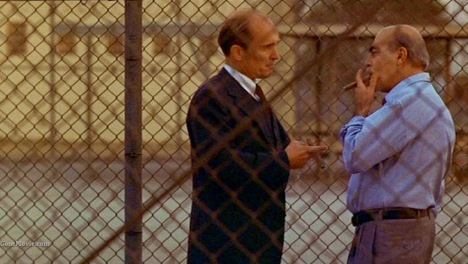 Tom Hagen (Robert Duvall) offers a solution to a common problem while discussing with Frank Pentangeli (Michael Gallo) in The Godfather Part II.

The Godfather Part II (1974):  The sequel to Coppola’s classic is considered by many to be even better than the original.  Debatable. But there’s no debating that the subtext is more pervasive and even better in Part II.  Maybe it’s because Al Pacino’s Michael is very similar to his father Vito, as a young man (Robert DeNiro).  Men of great power, who choose their words carefully, and measure and minimize their body language to conceal their true thoughts and feelings from their enemies.

Interestingly enough though, the best example of subtext in Godfather Part II comes not from Michael or Vito, but in a scene between Tom Hagen (Robert Duvall) and Frankie Pentangeli (Michael Gazzo) towards the end of the film.  Pentangeli is being held within an FBI safe house, having almost ratting out his don, Michael.  But an Corleone-induced case of cold feet during Pentangeli’s sworn testimony to a congressional committee leaves him stuck, a pariah now to the Corleone family and expendable to the FBI, warranting him protection from his mob enemies.  Hagen’s solution is subtle.  And comes in the form of allegory.  Tom appeals to Pentangeli’s love of history with a story about ancient Roman conspirators…

Tom:  “When a plot against the Emperor failed… the plotters were always given a chance… to let their families keep their fortunes. Right?”

Frank:  “Yeah, but only the rich guys, Tom. The little guys got knocked off and all their estates went to the Emperors. Unless they went home and killed themselves, then nothing happened. And the families… the families were taken care of.”

Frank:  “Yeah… They went home… and sat in a hot bath… opened up their veins… and bled to death… and sometimes they had a little party before they did it.”

Essentially, Tom and Frank use the allegory to negotiate a deal.  Tom tells Frank to kill himself, and Frank agrees, and even explains how he’ll do it, as long as the Corleone family agrees to take care of his family after he’s gone.  The whole arrangement made, through allegory – two characters operating and communicating beneath the actual dialogue.

Field of Dreams (1989):  The whole story in this modern-day Americana fantasy leads to the impossible reuniting of Ray Kinsella (Kevin Costner) and his deceased father John. This finally happens in the last minutes of the film, revealing to the audience what Ray’s improbable journey was all about – inner peace and redemption.  When Ray and his father first see each other, the scene is an emotionally weighty one to say the least.  Then, Ray and John exchange a fairly ordinary and overly-polite conversation.  John thanks him for putting the field together.  Ray introduces himself, his wife, and his daughter as if John were a stranger.  If you were to read this scene on the page without any context it would probably be mundane and forgettable.  But based on the amazing circumstances surrounding this moment and these two men’s relationship, it’s anything but. 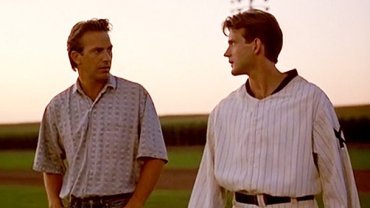 From there, a simple game of catch says more about the bond between father and son, being repaired more and more with each catch and throw, then any dialogue can.  So little said, so much felt.

The examples on this list are just a few of the many stellar examples of subtext at its best.  I believe that subtext resonates so much with us because it is so true to life.  We can’t put our finger exactly on what it’s doing, but it’s unmistakable nonetheless – we can feel it.

What are some of your favorite examples of subtext?